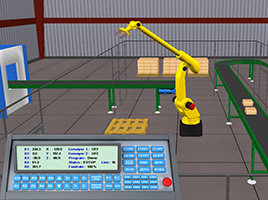 RoboLogix is a robotics simulation software package that is designed to emulate real-world robotics applications. It is, essentially, a software program that converts your computer into a fully-functioning 3D industrial robot that can be programmed to perform various functions and operations.

With RoboLogix, you teach, test, run, and de-bug programs that you have written yourself using a five-axis industrial robot in a wide range of practical applications. These applications include pick-and-place, palletizing, welding, painting and allow for customized environments so that you can design your own robotics application. With RoboLogix, the user can run the simulator to test and visually examine the execution of robot programs and control algorithms, while plotting instantaneous joint accelerations, velocities and positions.

RoboLogix is ideal for students as well as robot designers and engineers. It provides engineering-level simulation and allows for verification of the reach- ability, travel ranges and collisions. This results in greater reliability in the planning process and program development as well as reducing the overall completion/commissioning time. RoboLogix enables programmers to write their own robot programs, modify the environment and use the available sensors. These sensors include video cameras which are used for obtaining the desired position of the robot end effector. In addition, a control panel/teach pendant is included with the simulator that allows the user to command the robot to pick up a tracked object and return it to a home location through jogged commands or pre-programmed positions.

The features of RoboLogix simulation include:

RoboLogix introduces the concepts of multi-axes robots and demonstrates how they can be used in a plant or manufacturing system utilizing 3D simulation . The primary focus of the software is on automated manufacturing processes and allows for the programming, testing, and debugging of robot programs. Users gain practical, "hands on" programming of an industrial robot through a combination of teach-pendant programming, and 3D simulation environments. It is a powerful learning tool that provides students with access to robotic equipment worth tens of thousands of dollars.

By using RoboLogix, users can write their own robot programs, modify the environment and use the available sensors. These sensors include both analog and digital detection devices and are used for functions such as obtaining the desired position of the robot end effector. In addition, a teach pendant/control panel is included with the simulator that allows the user to command the robot to pick up a tracked object and return it to a home location through jogged commands or pre-programmed positions.

The RoboLogix programming environment is completely safe, but provides a very realistic simulation of control systems using robotic equipment. The ability to preview the behavior of a robotic system in a "virtual" world allows for a variety of mechanisms, devices, configurations and controllers to be tried and tested before being applied to a "real world" system. RoboLogix receives control signals, determines if contact or collision between objects in the system has occurred, and returns simulated sensor information as feedback. This system has the capacity of real-time simulation of the motion of an industrial robot through 3D animation. The principles of 3D motion simulation and both geometry modeling and kinematics modeling are presented in the RoboLogix virtual environment.